Young Business Executives in the Making!

"Teamwork is very important in some jobs and you really have to listen and co-operate with your team."

"Fantastic day with the children fully engaged and working as a team - even wanted to miss break!"

Look out Lord Sugar!
Posted by SATRO.org.uk at 07:56 No comments:

The pupils had a fantastic day and got so much out of the experience. In fact, their response of 100% positive feedback was a first this year! One pupil’s quote was particularly pertinent and seems to cover all the objectives…

"I learned to work as team without arguing. Importantly, how to make bookmarks. Sharing ideas with other people. I learned how it was like working in a company (I enjoyed it). When I am going to be over 18 I am going to be a purchasing manager."

A teacher agreed with the children's take on the day..


"A wonderful day of learning; social skills, entrepreneurial skills, presentional skills all developed.  Fantastic to see all the children so embracing of their roles."

The school were so impressed with the day and the pupils' positive experience that they are creating a display to show off their presentations and products!
Posted by SATRO.org.uk at 07:47 No comments:

320 year 10 students gained an invaluable insight into the world of work when they took part in the SATRO Business Game over two days last week. Teams of students at The Winston Churchill School in Woking became stationery companies for the day manufacturing booklets which they had to sell to a discerning panel of buyers. The game stretched their minds and abilities in a way they never thought possible! They had a myriad of business decisions to make as the game unfolded and were aided in their tasks by a raft of business volunteers whose job it was to guide, support and encourage their teams as they got to grips with all the challenges inherent in running a business.

The stress levels were high as companies competed with each other to see who could make the most profit. Many valuable life skills were learnt with many students commenting, “ I didn’t realise how difficult it would be to manage a business and a team of people I don’t usually work with. There were so many different aspects I had to take into account, no wonder my Mum and Dad are stressed when they get in from work!”

Our raft of business volunteers also greatly enjoyed the experience with one stating – “I was completely impressed, not just with the excellent programme, content and organisation but with how the students performed and threw themselves into the tasks – so creative and full of enthusiasm - really gratifying. The skills they acquired throughout the day will stand them in good stead as they enter the world of work.”

Another resounding success for the SATRO Business Game.
Posted by SATRO.org.uk at 04:01 No comments:

One of this year’s Nuffield students has received the highest commendation from his supervisors – that his name will be placed as second author on a publication due out early next year!  Royal Holloway has told SATRO that they are extremely impressed with our Nuffield student’s project and the way he showed dedication, patience and enthusiasm throughout his four week placement.  The student carried out detailed experimental work accurately and produced important data files to log and represent graphically his results.

Our Nuffield students have certainly surpassed all expectations this year – well done!
Posted by SATRO.org.uk at 04:09 No comments:

120 Pupils from Years 3, 4 and 5 gained a new perspective on maths when they took part in a Fun Maths workshop.  The event took place on 17th October at Southfield Park Primary School in Epsom, led by a SATRO team of four.  The pupils had the opportunity to solve a range of mathematical tasks involving calculation, sequencing, pattern recognition and logical thinking.  A buzz of excitement developed as the children achieved success in solving more and more puzzles.  Pupils feedback comments included: “I felt like a genius” and “my brain is gonna pop because I know so many facts.”

This workshop encourages KS2 pupils to feel more confident about maths.  The teachers were delighted with the teamwork element in a competitive environment and commented: “Children learnt how to solve problems in pairs and were able to practise using their mathematical knowledge and vocabulary”.
It all adds up to another successful event.
Posted by SATRO.org.uk at 09:06 No comments:

On Friday 12th October Year 4 pupils at St Joseph’s Catholic Primary School in Redhill had the opportunity to try their hand at civil engineering.  The challenge was to design a sporting stadium of their choice and then construct it within a time limit.  Working in small teams the pupils had to manufacture paper tubes for the building materials; this developed the pupils’ skills in creative thinking, planning, communication, team-working and leadership.  The children were able to work with professional engineers who were on hand to share their knowledge of forces in structures.  The support of volunteers enhanced the learning environment by bringing the world of work into the classroom.

Reflecting on the challenge, pupils made the following comments:

“I will remember the things I have learnt”, “I felt proud that we made a good effort”, “I learnt that building includes science” and, “I enjoy science even more than before.”

Two more of SATRO’s Nuffield Bursary students have received high commendation from their supervisor, Dr Mark Dockrell at SWITRR.  The students were involved in renal research and their supervisor said...

‘The two students this year were among the best we've ever had. They both worked on separate aspects of the same project and I'm hoping they will do a joint presentation [at the SATRO Nuffield Bursary Celebration Evening]. We hope to use their work in a conference presentation in spring of next year. If the work is accepted they will both be included among the authors!' 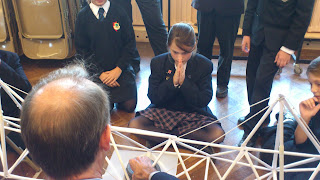 72 Year 8 students from 9 schools are busy designing, building and testing model bridges. And then testing them to destruction! Right up a 12-13 year-old’s street. This all-day event at the Royal Alexandra and Albert School in Reigate is the first of two such days we are running this term. As well as trying out the fundamentals of structural design, the students also learn about the importance of engineering in the world and are given some idea of the opportunities and careers open to engineers.  Mixed in teams with students from other schools, they also practice their communication and team-working skills.
Posted by SATRO.org.uk at 07:44 No comments:

One of our Construction Buses is at Epsom Racecourse today for the Surrey Opportunities Fair. Mobiles tutor Jeremy Gardner, manager Rob Riddelsdell and volunteer Dennis Hulls are showing visiting school students and local teenagers some of the building skills they can learn with SATRO. And, having a go themselves.

There were 1700 visitors last year and even more are expected this time. It’s going to be a busy day!
Posted by SATRO.org.uk at 07:38 No comments:

THE NDS RED BUTTON CHALLENGE 2013 IS OFF AND RUNNING

Students and teachers were at NDS’s offices in Staines, Surrey this morning to hear about this year’s challenge. This is the third challenge to be run by computer software giant NDS. Over the next five months, the teams will work with their mentors - NDS professionals – to produce concepts for an app for use with smartphone, iPad or laptop to make watching TV more enjoyable, interesting and exciting. The students will learn about product development and marketing. And, may even get to try their hand at some code-writing.

While at NDS, students and teachers were also shown some of the amazing yet-to-come-to-market ideas that NDS have produced. The sort of things you will be using with your TV at home in coming years.

Building a future for the young people of Surrey!

Staff at Willmott Dixon’s offices near Esher, Surrey made a huge difference to the lives of young people in Surrey and South London today when they handed over a donation of £30,000 to small local charity SATRO (www.satro.org.uk).

Many people at Willmott Dixon have volunteered on SATRO’s programmes over the years – mentoring, business games, problem solving challenges, construction challenges – you name it, they do it! In 2011-2012, 22 members of staff gave a total of 234 hours of time to support and inspire 3,345 young people in this way.

In 2011, when Willmott Dixon staff heard that all SATRO’s government funding had been cut and the future of its work was threatened, they stepped in to nominate SATRO as their Charity of the Year. On 29th June – in some of the worst ‘summer’ weather imaginable around 49 members of staff competed in the Three Peaks Challenge to raise money for SATRO. Over the weekend they climbed Ben Nevis (1344m), Scafell (978m) & Snowdon (1085m).

In Surrey between 800-1000 young people are NEET (not in Education, Employment or Training) at any one time  and youth unemployment is at record levels – in Surrey in February 2012 it was 24% (3,025) young people between 18 -24, and many of these had been unemployed for more than six months.

Much of SATRO’s work, in particular its fleet of Mobile Construction Classrooms, is directly related to young people who are disengaged with the education process, sometimes with behavioural difficulties, with low self-esteem and aspirations, and at risk of exclusion or becoming NEET, (Not in Education, Employment or Training). In the academic year 2011/12 SATRO’s ‘Construction Buses’ reached over 430 young people from 43 schools and youth organisations in Surrey - 90.9% of our students gained a full qualification in Construction – this is an amazing achievement when you consider that on joining our programme many of those students had typically not enjoyed their time in the education system – too often they had come to believe that they are failures and that it is ‘not worth trying’. Young people leaving SATRO’s programme at its completion go on to join college courses, apprenticeships or employment – having discovered for themselves that they have a real talent and can succeed at something.
Willmott Dixon’s outstanding contribution will be used to support the on-going costs of SATRO’s Construction Bus programme – providing materials, replacing failing equipment, repairing the vans when they need it – and replacing the vehicles as the need arises too.

Dr Beccy Bowden, CEO of SATRO, said ‘The contribution raised by Willmott Dixon staff will ensure that hundreds of young people on our mobile construction classrooms will learn new skills and discover that they are able to succeed and really make something of their lives. This is a huge difference to make to a young persons’ life – and to society, and Willmott Dixon staff should be incredibly proud of all the help they have given SATRO’.
Posted by SATRO.org.uk at 05:50 No comments: