In mathematics when "x" is used as shorthand for "multiply" thank Sir William Oughtred. He was rector of the Surrey village of Albury from 1603 to his death in 1660. A Fellow of Kings College Cambridge he taught mathematics free to anyone interested in the subject. One of his many students was Christopher Wren, the acclaimed architect of St Paul's Cathedral. He authored mathematics text books and these had other familiar terms such as Sin and Cos for the first time. His books were used by scientists such as Isaac Newton and Robert Boyle.

Sir William Oughtred's greatest contribution to STEM however, was to invent the Slide Rule. Four hundred years ago this year John Napier invented Logarithms making mathematical problems easier to solve. Using this, Oughtred inscribed logarithmic scales on two sliding wooden strips creating a powerful and simple calculating device. A slide rule is about the size of a ruler. By sliding the scales and aligning your numbers quick calculations can be made. Until the introduction of computers the slide rule was a fundamental science and engineering instrument. A slide rule needs no electricity or software and because of their simplicity were used by NASA as computer backup for the Apollo moon programme. Lunar Module pilot Buzz Aldrin took his slide rule with him to the moon and in 2007 it famously auctioned for $77,675.

So if you visit Albury remember that it was here, four hundred years ago, some of our common mathematical symbols were defined and a device invented that flew to the moon!

GIVE-IT-AWAY to make a difference!
A real example of social entrepreneurship

Surrey-based charity SATRO is delighted to announce that Charlotte Grobien OBE, a unique and very special social entrepreneur, has stepped up to the challenge of changing young people’s lives by supporting our programmes to inspire them about their future careers. 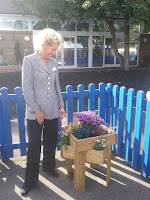 Charlotte visited Woodlands School on 1st October 2015 to see the SATRO Mobile Classroom in action accompanied by SATRO Chairman, James Dubois and Fundraiser, Lucy Miguda.  Charlotte has very kindly sponsored this very special activity for the students for this academic year, the students were delighted to present her with a bird box they had made during their sessions with the SATRO Mobile Classroom.

Charlotte Grobien, said “I loved the visit to Woodlands.  Such a lovely school in all respects: beautiful grounds and buildings with dedicated staff and happy children.  It is a pleasure to help them with funding for the SATRO Mobile Classroom”

During the course the students have also made planters which so impressed Charlotte that she has commissioned the students to make two for her next project in Woking.  The students are thrilled with this opportunity to showcase and sell their work; for Charlotte this is real social entrepreneurship! 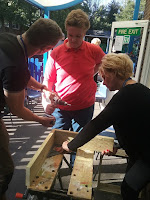 Charlotte runs Give-it-Away which is unique in how it raises money for charity – it builds  houses, sells them and then gives the profits to charities that fit with Charlotte’s charitable interests.  Charlotte supports small, local charities who work with vulnerable children and young people who have disabilities, learning problems, difficult home backgrounds and where there is also financial deprivation.

Gill Lloyd, Teacher at Woodlands School commented “The students look forward to working with the tutor from SATRO each week and are very proud of their new skills and of the useful items that they make”.
Woodlands is in Leatherhead and is a school for children aged 2–19 with a range of difficulties including severe learning difficulties and complex needs. The SATRO Mobile Classroom will be teaching the schools 6th Form Students construction skills to enable them to extend, enhance and learn new manual skills.

The school have appreciated the benefit of the SATRO offer which gives the students opportunities to develop their awareness of safety, how to follow instructions, learn new and different vocabulary, work as part of a team or in a group, learn to take turns and work independently. The SATRO Mobile Construction Classroom is very exciting for the students; and provides them with different stimulation and the opportunity to learn by doing which suits the learning style of many of the students. The school very much appreciates that this opportunity would not be available to us without the financial support of the “Give it Away” Charity or the expertise of Surrey SATRO.
Posted by SATRO.org.uk at 01:45 No comments: 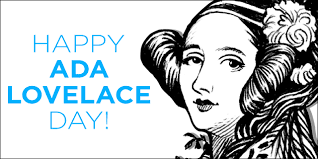 The 13th October is Ada Lovelace Day which is an international celebration of the achievements of women in science, technology, engineering and maths (STEM).  She was a Guildford resident and is credited with creating the first computer programmer and this year it is 200 years since she was born.

She was born Ada Gordon in 1815, sole child of the brief and tempestuous marriage of the poet George Gordon, Lord Byron, and his mathematics-loving wife Annabella Milbanke.  Fearing that Ada would inherit her father’s volatile ‘poetic’ temperament, her mother raised her under a strict regimen of science, logic, and mathematics. Ada herself from childhood had a fascination with machines– designing fanciful boats and steam flying machines, and pouring over the diagrams of the new inventions of the Industrial Revolution that filled the scientific magazines of the time.  She spent her childhood at what is now Horsley Towers, Horsley, Surrey.

At the age of 19 she was married to an aristocrat, William King; when King was made Earl of Lovelace in 1838 his wife became Lady Ada King, Countess of Lovelace.  She had three children.  In 1833, Lovelace’s mentor, the scientist and polymath Mary Sommerville, introduced her to Charles Babbage, the Lucasian Professor of Mathematics who had already attained considerable celebrity for his visionary and perpetually unfinished plans for gigantic clockwork calculating machines. Charles Babbage and Ada Lovelace both had somewhat unconventional personalities and became close and lifelong friends. Babbage described her as “that Enchantress who has thrown her magical spell around the most abstract of Sciences and has grasped it with a force which few masculine intellects could have exerted over it,” or an another occasion, as “The Enchantress of Numbers”.

Lovelace was deeply intrigued by Babbage’s plans for a tremendously complicated device he called the ‘Analytical Engine’, which was to combine the array of adding gears of his earlier Difference Engine with an elaborate punchcard operating system. It was never built, but the design had all the essential elements of a modern computer.

In 1842 Lovelace translated a short article describing the Analytical Engine by the Italian mathematician Luigi Menabrea, for publication in England. Babbage asked her to expand the article, “as she understood the machine so well”. The final article is over three times the length of the original and contains several early ‘computer programs,’ as well as striking observations on the potential uses of the machine, including the manipulation of symbols and creation of music. Although Babbage and his assistants had sketched out programs for his engine before, Lovelace’s are the most elaborate and complete, and the first to be published; so she is often referred to as “the first computer programmer”.

The Analytical Engine remained a vision,  until Lovelace’s notes became one of the most critical documents to inspire Alan Turing’s work on the first modern computers in the 1940s.

SATRO, the Guildford based educational charity, is delighted to announce the appointment of Alan Foster, McLaren Automotive Operations Director as new Trustee 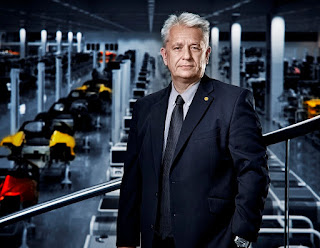 Dr Beccy Bowden CEO of SATRO has announced that Alan Foster has been appointed as a SATRO Trustee.  Dr Bowden said, “We are delighted that Alan has joined the Board of SATRO – I know that his wealth of business experience will be a huge benefit to us in continuing to grow and develop our organisation. The Trustees of a small charity are very much unsung heroes – we truly could not have survived in recent years without our hard-working and knowledgeable Board."

Alan Foster commented, “Having not excelled at school and chosen an apprenticeship route, I have an affinity with SATROs vision. I was influenced by a couple of business leaders when I was young and now find myself in a position where I can hopefully light a blazing passion in people, so that they too can be supported to fulfil their true potential. I bring enthusiasm, professional business knowledge and lots of practical expertise to SATRO that will support the broad spectrum team in many aspects of their pioneering work.”

Alan Foster’s career has spanned 39-years in the international automotive manufacturing industry, with over 20 years in management, executive and board positions. The last eleven years he has been with McLaren as their Operations Director. McLaren Automotive are manufacturers of some of the world’s most advanced, fastest and most expensive high performance cars.

Alan also acts as a Brand Ambassador for McLaren Automotive and regularly hosts internal events; expanding the global awareness of the brand through interviews and videos. Alan says, “The simplistic elegance of the manufacturing systems deployed within McLaren has been referred to as “genius”. The philosophy is constructed around simple visual controls and metrics, people systems and engagement.”

Before McLaren, Alan who started as a Press Tool making Apprentice, went on to work in engineering, management and executive roles at Ford Motor Company, Toyota UK at Burnaston, and from 1997 to 2005, for General Motors in the UK, Germany and in Switzerland, where he was their Lean Consulting Group manager. Alan supplemented his work career with academic qualifications, attaining a 1st class Honours Degree in Manufacturing from Liverpool and an MBA from Cranfield. He was recently acknowledged by The Manufacturer publication as one to the Top 100 most influential people in the UK Manufacturing industry. He also holds Advisory Board positions with Liverpool Superport and ICON Aircraft.