Florence Nightingale was born into a life of privilege in 1820. By her death, in 1910, it is estimated, her social campaigns had helped to increase national life expectancy by 20 years! Read about her amazing lifetime achievement below. 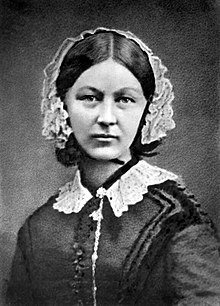 As a young woman, Florence decided to use her energy and social connections to improve the lives of others.At that time professional nursing did not exist. Seeking out experts, studying and learning from the few available books gave her the authority to give the very first formal nurse training. In 1854, using her connections, she took her nurses to tend casualties of the Crimean War in Russia. She discovered horrific filthy hospital conditions and keeping meticulous statistics found ten times more soldiers died from infections than their wounds.

Organising and managing soldiers nursing, she improved hospital hygiene and health care. While touring the wards at night she became known as the 'Lady with the Lamp'. Florence was appalled soldiers had died from preventable disease. Back in Britiain, she resolved to do something to help the population at large who, in urban Victorian Britain, lived in unhealthy conditions.

She used her fame to campaign for leaders in society and parliament to improve public health by providing clean water and sanitary infrastructure.

Florence realised that simply writing letters would be ineffective. Straight statistics could quickly be forgotten or not grasped. She needed to think of a better way of presenting her message.

She decided pictures might work and developed a form of Pie Chart - the Polar Area Diagram. A visual diagram of statistical data is much easier to use and understand. The Polar Area Diagram is similar to a usual pie chart, except sectors have equal angles and differ in how far each sector extends from the centre of the circle. 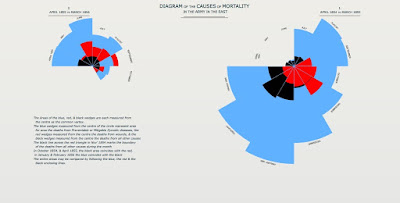 Her visual method proved to be very effective in her campaign to fight for better health conditions.

Florence Nightingale is known, not only as the mother of worldwide nursing, but also as a pioneering statistician. Some of her achievements are listed below: