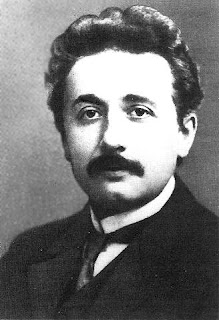 In the late summer of 1905, an exhausted 26 year old Swiss Patent clerk collapsed on his bed to recover. He had just submitted the last of four short academic papers. In these papers he had, on his own, laid out the foundations of modern physics.

Since school, he had been thinking about physics that did not make sense... an experiment showing light did not speed up or slow down, as you moved, like sound did; The earth was millions of years older than the sun had enough fuel to shine for; A theory that energy radiated in 'packets' rather than flow and that atoms were imaginary particles...

Here is the explanation of the 1905 papers in his Annus Mirabilis (year of marvels).

Quantum Theory. Photoelectric effect and the Photon.
Einstein devised a simple experiment to prove a theory that energy emitted in radiation 'packets'. If light was shone onto a metal plate at a specific wavelength, and not its brightness, it kicked off electrons. The effect proved electromagnetic waves like heat, light and radio came in 'energy packets'. We now call them 'photons' and are fundamental to quantum physics.

Atomic Theory. Proof atoms are real.
Most scientists believed atoms were theoretical. To prove their existence Einstein used 'Brownian Motion.', where microscopic particles can be seen randomly bouncing around inside pollen grains. He said water molecules must be striking the particles. By precision measurement of particle movements and his mathematical analysis the size of the molecules were calculated. This was the first proof for the existence of atoms and molecules.

Relativity. Space and time are connected.
Einstein conducted a 'thought experiment' and imagined travelling on a beam of light comparing his experience with stationary objects. He found that, as light speed is constant, irrespective of your speed, time itself must stretch between the two. The passage of time depended on relative speeds most noticeable close to light speed.

Nuclear Physics. Energy and mass are equivalent, the discovery of nuclear energy.
This is Einstein's famous equation E = mc² (energy = mass x the speed of light c squared). He said, given the right conditions, a tiny amount of matter could convert to unimaginable amounts of energy. This explained why the sun had not burned out and must be converting its mass by a new type of energy - nuclear energy. This paper was so advanced it did not reference any other work.

Albert Einstein had spent ten years thinking through these ideas. The papers changed science and showed the universe was a far stranger place than believed. His imagination and hard work required unshakable belief to convince the scientific establishment. He received a Nobel Prize 16 years later in 1921. Einstein is one of the great scientists and his 1905 work was only the start of his discoveries. When asked about genius, he said "genius is 1% talent and 99% hard work!"

Is there science that does not make sense today? Plenty: Dark Matter (the invisible effect that holds galaxies together), Vacuum Energy (the expansion of the universe is accelerating) and - is there a Universal law combining all the forces of the nature? ... there is room for more Einsteins!


- John Faulkner, Guest Blogger.
Posted by SATRO.org.uk at 07:31 No comments: