Juliet Martin has recently completed her SATROclub extended research placement at St George's Hospital. Juliet was tasked with investigating sudden cardiac death in the young: The sudden death of a young person from a silent cardiac disease is a very tragic event.  In most instances the deaths are due to inherited conditions of the heart, therefore evaluation of first degree relatives is recommended. Her project included assessing the experience of these relatives while attending an expert clinic.

Here's what Juliet had to say about her first week at St George's Hospital...

"This week I have arrived at St George's Hospital where I will be working with another SATRO student and my mentor on a research project concerning the profiles of the hearts of young sports players.

The best thing about this week has been having the opportunity to sit in on 'clinic': consultations between cardiac outpatients and the cardiologists I'm working with. I've been able to observe how the doctors interact with patients as well as beginning to understand the process of diagnosis. Each patient that is seen comes with a completely different set of symptoms, risk factors, history and lifestyle, so that the two or three hours spent observing is extremely varied and flies by.

My mentor challenges us to look at the patient's ECG report and try to identify any abnormalities before he tells us what's already been flagged up which means that we are much more aware of the real-life link between what we see on paper and the patient's health. It's been really exciting beginning to understand and be able to interpret the various patterns we can see.

This ties in with how we are beginning research for our project. We have been provided with hundreds of ECG traces, echocardiogram reports and general health and family history information from adolescent football players. At this stage, we are entering all these details into a database for analysis later on.

Alongside the practical experience of clinic, these data become more significant and comparable and I am beginning to become familiar with 'normal' readings for the PR interval, QRS duration, QRS axis and various other pieces of information which made no sense to me when I first arrived. It's been amazing how much you can learn in a week!

The ultimate interest of our project and the day-to-day research of my mentor is enlargement of the heart. I have begun to read about HCM (hypertrophic cardiomyopathy), a disease in which the myocardium becomes thickened, and the data I've been examining so far as well as some of the patients I've observed in clinic have demonstrated instances of thickening of the heart muscle in sports players due to extreme exercise. All the knowledge I'm gaining is allowing me to develop a keen appreciation for the real research being undertaken here at St. George's Hospital and to begin to understand the importance of and motivation for large-scale medical research projects.

I'm looking forward to beginning to compile our data and hopefully analysing the trends that come out of it next week. I also hope to have opportunities to sit in on different types of scan to see how the results I've been reading are actually generated." 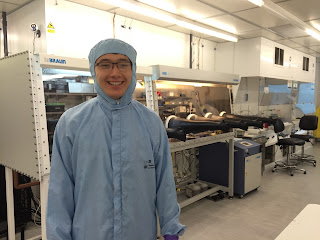 Michael Collis recently completed his SATROclub Extended Research Placement at the University of Surrey under supervision of Dr Radu Sporea. Michael was tasked with investigating next-generation electronic circuit applications made on large areas with unconventional technologies such as inkjet printing and resulting in flexible, low-cost and power efficient electronics.

Here's what Michael had to say about his time at the University...

This week I have been learning all about transistors, and preparing for the lab work that I will be doing during the next few weeks. First, I read part of “Electronics for Today and Tomorrow” by Tom Duncan, particularly the sections on semiconductors, diodes and transistors. I learnt the differences between n-type and p-type semiconductors (the former has electrons as charge carriers, the latter has positive “holes” as charge carriers), as well as about the junction that is created between the two when they are placed together. I then went on to learn about the junction transistor, which is the less common, but simpler type of transistor often used in high current applications, followed by the junction field effect transistor, and how they work. With this base understanding, I then learnt about Metal-Oxide-Semiconductor Field-Effect-transistors, otherwise known as the MOSFET, the most common of transistors today, used all the time in integrated circuits, which is very close to what my project is on. I went into more detail in these, also learning about its’ electronic characteristics and equations to model it, as well as how and where they are used. Finally, I applied this knowledge to the source-gated transistor, which my project is on. At this stage, I also learnt about possible production techniques, as well as the theory behind using an inkjet printer to create them. Finally, I made a general plan of the next three weeks with Dr Sporea, so that we can make the most out of the time available.

This week started with safety talks, first for the general labs, then for the clean room. I also obtained my amazing blue clean room suit. The first two days were getting used to the inkjet printer, which I printed a protective layer on copper covered plastic in certain designs (starting simple, but getter more complex on Tuesday).  On Tuesday morning, I met Professor John M Shannon, the person who discovered and wrote the first paper on the Source Gated Transistor. On Wednesday, I etched my previously made designs in the copper in the clean room, before attempting to print silver electrodes on glass. I spent the whole day on Thursday in the clean room, preparing substrates, coating them in different substances and using masks, using the JLS Sputterer and other pieces of equipment, as well as making a semiconductor solution. During which, I made metal electrodes on glass, followed by a dielectric and them more metal, putting via holes in some of them, to test Via holes. On Friday I measured the current and resistance of the samples from Thursday, which gave out good results. Afterwards, I attempted to print a semiconductor ink, which failed due to clogging, before reading through numerous papers on Via hole printing so that we can try and improve our process.

This week I started by cutting around 30 glass substrates, for creating source gated transistors on. Before I could do this, I had to clean all the glass by first blowing each substrate with high pressure nitrogen gas, to get rid of any dust particles. Then, I placed them in beakers filled with acetone, and placed the beakers in a agitated water bath for five minutes. Next, I took them out of the water bath and rinsed them with acetone, before blow drying them with nitrogen gas. I then placed them in another beaker filled with isopropanol and then in the agitated water bath for 5 minutes. I rinsed the samples with isopropanol and blow dried with nitrogen gas. Finally, I placed them in a machine that fired high energy oxygen ions at the substrate, finally giving us a atomically clean substrate. Afterwards, I used the JLS sputter machine to place source and drain electrodes on the substrates, using different metals. Then I deposited two different semiconductors, insulator and finally a gate on the substrates. On Friday, I finally got to measure the electrical characteristics of the transistors; even though most had short circuits, the one that worked showed great electronic characteristics.
Posted by SATRO.org.uk at 04:16 No comments:

Born in 1864 Marie Curie, one of the great pioneering scientists, remains the only person to win Nobel prizes in both Physics and Chemistry. She initiated the theory of radioactivity and discovered two new elements. With her husband Pierre, also a Nobel Prize laureate, they designed techniques to analyse radioactive uranium minerals that she suspected contained new elements, discovering Radium and Polonium. Their equipment included an ionisation chamber to convert the mineral's radiation to electric charge and an electrometer to measure the tiny currents generated. Isolation of the first element, Radium, took many years of chemical processing. Following their discoveries Marie went on to demonstrate the benefits of radiotherapy to treat cancer. During WW1 she personally deployed field X-Ray machines and later founded the Curie Institutes for medical research in Paris and Warsaw. However, the dangers of radiation exposure were not known, she kept a jar of luminous Radium by her bedside as a nightlight and radioactive samples in her pocket. She died at the age of 66 from a rare form of anaemia it is believed resulted from overexposure to X-Rays from her life saving war work. It took until the 1980's to decontaminate her laboratory sufficiently to open it as a museum!

Did you know that you may have a device based on Marie Curie's research equipment in your house? It is the ionising Smoke Detector. Smoke particles, which are electrically charged, entering the detectors' ionisation chamber will trigger the alarm.

The pioneering work of Marie Curie and her husband Pierre continue to have a profound affect on our world today, particularly in medical research and treatment of cancer. You may also recognise the daffodil emblem for the Marie Curie appeal for cancer care.

- John Faulkner
Posted by SATRO.org.uk at 06:05 No comments:

SATRO is delighted to announce that Heathrow Community Fund has donated £5,000 towards the cost of the SATRO Mobile Construction Classroom to attend Sunbury Manor School, Sunbury-on-Thames, Middlesex on a weekly basis. SATRO runs a fleet of five mobile classrooms which attend schools across Surrey and its boards teaching up to BTEC Level 1 Building and Construction Skills to Years 10 and 11 students.

Louise Duncan, HeadTeacher said “We have worked for years with SATRO Mobile Classroom for our Year 10 and Year 11 students and it has made such a difference to them.  They have relished the opportunity for more hands on practical work, enjoyed developing their skills and working in a completely different environment.  For some students it has given them an opportunity to succeed in a way which more academic subjects have not always offered them.  It has also had such a beneficial impact on their other students as they have seen the Construction Classroom as something special for them, somewhere where they can succeed and work in a different way and for many it has shown them a way into college.  We were so disappointed that for financial reasons we were not able to continue this provision and so grateful for the injection of funding from Heathrow Community Fund which means we will be able to do so.  It will make such a difference to our next cohort of Year 10 students, thank you.”

Heathrow Community Fund also donated £5,000 to SATRO to help fund a new van for this much needed programme.

Heathrow Community Fund is part of an independent grant–making charity set up by Heathrow’s owners to support and strengthen local communities close to the airport.  In the past two years it has donated more than £1 million through three grant programmes, funding projects which support young people, help protect the environment and support active local communities.  Funds come from an annual donation from the airport, donations from airline passengers and fine imposed on aircraft that breach noise limits.
Posted by SATRO.org.uk at 02:48 No comments: