"We may say most aptly, that the Analytical Engine weaves algebraical patterns just as the Jacquard-loom weaves flowers and leaves."

This Ada Lovelace quote describes her belief that complicated logical problems could be solved by machine, just as the recently invented automatic loom could weave brocade cloth.

In 1833, at the age of 17, gifted mathematician Ada became an associate of Charles Babbage the Cambridge University Lucasian Professor of mathematics. He named her The Enchantress of Numbers. Then, tables such as for navigation, were calculated by human 'computers'  but prone to mistakes. Babbage saw mechanical processing could eliminate error and started to design a machine called the Analytical Engine. Translating a Babbage lecture about the engine inspired Ada to produce the very first published computer program. This required a mathematical algorithm to be converted into the sequence of steps necessary for the engine to compute. The program formed a table for punched card instructions. The cards were to operate the engine and in this case produce Bernoulli numbers, for use by mathematicians. Ada proposed that beside numbers there would be no reason why machines could not work with symbols such as musical notes.

Born on 10th December 1815 Ada grew up during the Industrial Revolution. With a scientific upbringing she had a natural desire to find out as much as she could about the world of engineering. She was married to the Earl of Lovelace and lived in Horsley with her three children. At the age of only 36 she died of cancer but her legacy is computer programming which lives on with us every moment of the day in the modern world.

Ada was a visionary and here are some of her quotes:

"A new, a vast, and a powerful language is developed for the future use of analysis, in which to wield its truths so that these may become of more speedy and accurate practical application for the purposes of mankind than the means hitherto in our possession have rendered possible."

"The Analytical Engine might act upon other things besides number, were objects found whose mutual fundamental relations could be expressed by those of the abstract science of operations, and which should be also susceptible of adaptations to the action of the operating notation and mechanism of the engine… Supposing, for instance, that the fundamental relations of pitched sounds in the science of harmony and of musical composition were susceptible of such expression and adaptations, the engine might compose elaborate and scientific pieces of music of any degree of complexity or extent."

.....and here, much like a modern day spreadsheet, is the first published program: 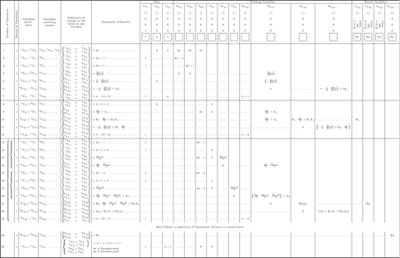 There is an exhibition at the Science Museum until the end of March 2016 of Ada's life and work...

If you would like to find out more information and/or book tickets for the Ada Lovelace Evening taking place tomorrow in aid of SATRO follow this link. Alternatively call Guildford Tourist Information on 01483 444334